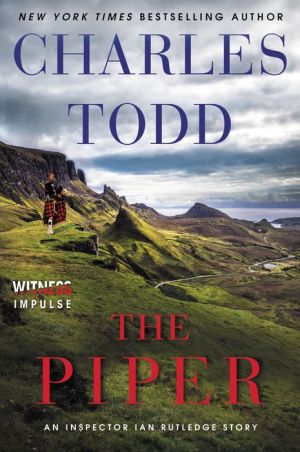 Share:
Scotland Yard inspector Ian Rutledge returns shell shocked from the trenches of World War I, tormented by the memory of Hamish MacLeod, the young Scots soldier he executed on the battlefield. Now, Charles Todd features Hamish himself in this compelling, stand-alone short story.
Before the Great War, Hamish farms in the Highlands, living in a small croft on the hillside and caring for a flock of sheep he inherited from his grandmother. When at the height of a spring gale, he hears a faint cry echoing across the glen, Hamish sets out into the stormy night to find the source. Near the edge of the loch he spots a young boy lying wounded, a piper’s bag beside him. Hamish brings the piper to his home to stay the night and tends to his head wound, but by the time Hamish wakes the boy has vanished.  Worried, he goes in pursuit of the injured piper and finds him again collapsed in the heather--dead.
Who was the mysterious piper, and who was seeking his death? As Hamish scours the countryside for answers, he finds that few of his neighbors are as honest as he, and that until he uncovers a motive, everyone, including Hamish, is a suspect.