The Perfect Everything — Jeffrey Allen 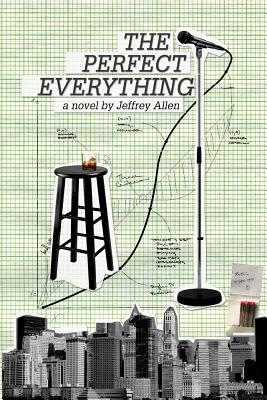 
Alan is a successful young advertising copywriter in New York who has long harbored aspirations of becoming a standup comic. When his live-in girlfriend Cassan suddenly breaks up with him, he quits his job and launches into an over-analytical pursuit of the ideal relationship and the perfect career by sampling many of each. Alan attempts to plot his life on a grid where the X-axis represents relationships and the Y-axis, careers. The more grid points, the more informed he will be. At point 2,4 he’s a journalist dating a young party girl in Key West; at point 3,1 he’s single and drinking with Elden Lewis, a quirky barstool philosopher, sounding board, and best friend. Alan soon befriends quasi-famous NYC comedian Lutsey Lampkin, who pushes Alan to focus on his comedy aspirations. Through it all, Alan contends with youthful angst, lovesickness for Cassan, and a decidedly humorous yet spastic worldview.