The Penguin Who Knew Too Much — Donna Andrews 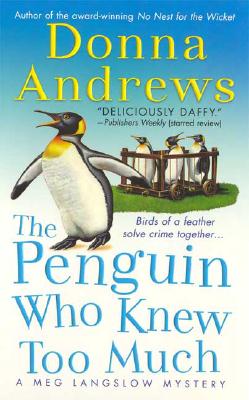 Share:
Hold on to your hats, everybody! Donna Andrews is taking us on another ride into the wonderful world of Meg Langslow, a world filled with laughter as well as the knotty problems Meg always seems to encounter and---somehow---solve.
Okay, maybe there are people in Antarctica with penguins in their basements, but in Virginia? Only Meg's dad could manage that one. A body down there---well, that's somewhat more likely.

It turns out that explaining the penguins' presence is easy---Meg's dad volunteered to take care of the birds until the future of the bankrupt local zoo could be determined. But identifying the body in the basement proves a harder task---could it be, as Meg fears, that of the vanished zoo owner?

In the small southern town of Caerphilly, rumors fly quickly, and all the other well-meaning citizens who have agreed to take in zoo animals are now worried that they might be stuck with their guests indefinitely. So when Meg's dad generously offers to help out anyone who can no longer care for their four-legged charges, a parade of wild creatures begins to make Meg and Michael's newly renovated house look more like Noah's ark.

Meg and Michael have been planning to elope in order to avoid the elaborate wedding their mothers have begun to organize---a plan that's threatened by both the murder investigation and the carnival of animals. The only way to set things right, Meg decides, is to identify both their uninvited visitor and the killer who put him in their basement.