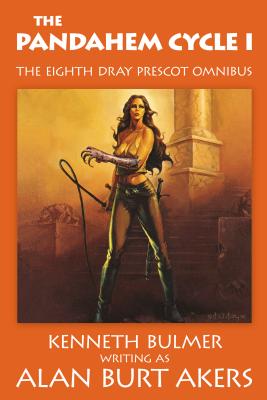 Four hundred light years from Earth, Kregen is a marvelous world, peopled by wonderful beings, filled with the light and clamor and furor of life lived to the hilt. But Kregen has its darker side, where horror and terror bind innocent people, where sorceries rend reason, where injustice denies light.

Called to be the Emperor of Vallia, Dray Prescot, with his comrades, has vanquished poor old mad Thyllis, Empress of Hamal, and now seeks to create a fresh and lasting unity among all the nations of Paz. They all face a common foe in the Shanks, the Fishheads who raid their coasts. And, there are worms within the bud, secret enemies who desire only to drag all down for their own selfish ends...

Mazes of Scorpio:
Although his nemesis, the mad empress of Hamal, and her accomplice, the evil Wizard of Loh have been destroyed, Prescot finds that the strands of this enduring battle have not been tied off. An old conspiracy has been given a new and darker impetus which leads him to the jungle continent of Pandahem. Beneath the dark and sweltering swamps lies the deadly labyrinth of the Coup Blag where Prescot clashes with a new and terrible foe in the mazes of Scorpio!

Delia of Vallia:
On Kregen there are warrior men and warrior beasts with mighty fraternities of valor and courage. There are whispers of similar organizations among the high-born women of many lands. Delia of Vallia, leader of the mystic guild The Sisters of the Rose, is on a mission to bring justice to one who has betrayed her blood oath and her empress. A novel of intrigue, combat, and vengeance that will bring Delia face to face with the traitress Jilian in the hidden arena of the whip and the claw.

Fires of Scorpio:
Triple trouble always follows Dray Prescot, especially when he thinks he has things under control. This time, while involved with setting things right on the continent of Pandahem, the Star Lords yank him away from his friends and dump him, weaponless, at the gates of the terrible temple of the Leem. Rescuing a girl sacrifice is only the start, for next he has to help Pompino to torch all the temples of the Silver Wonder, and take to the sea to confront the next wave of the fish-headed marauders from Kregen's Southern Hemisphere.

This edition includes the short story “Lallia the Slave Girl”.