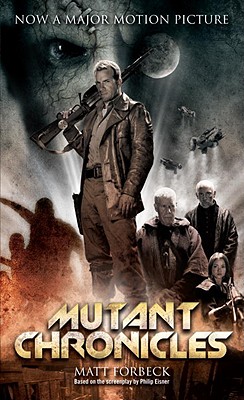 "It will be a dangerous mission. I don't expect that any of us will survive. But it's a chance to save mankind, to save our world. Maybe the last chance."

By the end of the twenty-third century, Earth is a plague-ridden, war-ravaged cesspool dominated by megacorporations whose ruthless armies fight one another for power and for the very scarce resources there are left.

Capitol fighters Mitch Hunter and Nathan Rooker are battling the opposing forces of the Bauhaus corporation when a cannon blast exposes and destroys an ancient stone seal in the ground. From the bowels of the Earth crawl hordes of necromutants with razorlike boneblades for arms, hideous humanoids that thrive and multiply by commandeering the bodies of dying soldiers. Mitch barely escapes -- only to discover that both the rise of the mutants and the "Deliverer" who will save humanity have been prophesied.

Unless Mitch and a group of warriors from each of the megacorporations succeed in reaching the hidden horrors and wiping out the mutant scourge, ouir world will literally become a hell on Earth.
Reviews from Goodreads.com