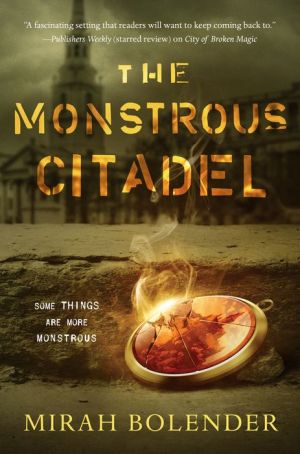 The Monstrous Citadel is the sequel to Mirah Bolender's City of Broken Magic―a fast-paced, adventure fantasy where a bomb squad defuses the magic weapons of a long forgotten war.

Polygon―17 New Science Fiction and Fantasy Books to Check Out This November
Amicae, City of Sweepers, survived the Falling Infestation which nearly destroyed it thanks to the efforts of Laura and Okane. While the ancient monsters have been beaten back for the moment, new and more monstrous dangers face them in the form of belligerent bureaucracy, dangerous gangs, grasping Sweepers bent on personal glory . . .
And Rex, the City of Kings, who breed their own kind of monstrosity.
Laura and Okane must go to Rex to reclaim the secret weaponry that keeps Amicae safe and come face to face with a horrifying truth about the Rex and their designs on all of Orien's cities.
Chronicles of Amicae
City of Broken Magic
The Monstrous Citadel