The Monsters in Your Neighborhood — Jesse Petersen 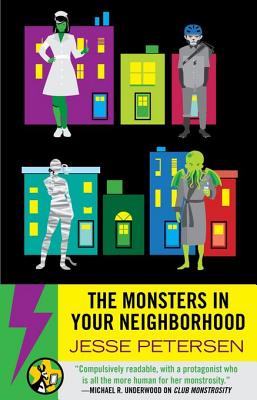 As one of Frankenstein's Creatures, Natalie Gray knows that unique parts sometimes make up a great whole. Still, leading a diverse support group for monsters-now including Cthulhu -isn't an easy task. Especially not since the internet arrived.

New York City embraces the different and the bizarre. Still, even for such a fun-loving city, the supernatural and monstrous might be a bit too much. It's been six months since the members of "Club Monstrosity" overcame the most recent spate of anti-monster violence and they've reestablished their routine of meeting in a church basement once a week to (ugh ) talk about their "feelings." Still, they also know a war against them is brewing.

Natalie and Alec (the werewolf) have begun dating, and the mummies Kai and Rehu are tighter than a bug in a...well, bandage. But when modern means (YouTube, Twitter, bits and bytes) are used to chilp away at the solidarity of these ancient monsters, it's up to Natalie to save the day.

#MonstersInNewYork may be trending on Twitter, but this girl's trending toward saving the day...somehow.