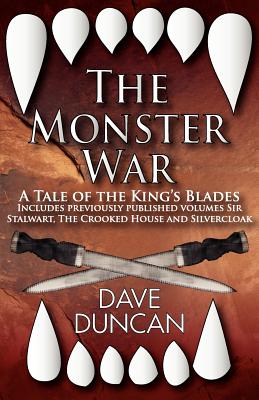 Originally issued as a YA trilogy, "The King's Daggers" (including volumes Sir Stalwart, The Crooked House and Silvercloak), The Monster War works equally well as a single novel. The story fills a gap in the first Blades novel, The Gilded Chain, when King Ambrose sought to shut down the evil sorcery of the "Elementaries" and the sorcerers fought back by trying to kill him. The same great characters are all here: Ambrose himself, Grand Master, and Blades Durendal, Bandit, and Snake. Appearing for the first time are Sir Stalwart, the only Blade who does not bear a binding scar, and Emerald of the White Sisters, the only girl ever enrolled in Ironhall. The action wanders across Chivial from the White Sisters' headquarters at Oakendown, to Grandon, and into the heart of Ironhall, for the evil penetrates even there. If you missed this one the first time (and most Blades fans did) then here is your chance to join the action as the King's Blades ride again!
Reviews from Goodreads.com