The Monster in the Box — Ruth Rendell 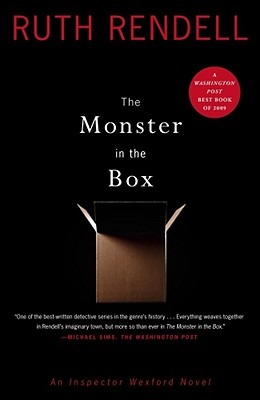 The Monster in the Box is the latest addition to Ruth Rendell's Inspector Wexford series. In this enthralling new book, Rendell, takes Inspector Wexford back to his first murder case -- a woman found strangled in her bedroom. Outside the crime scene, Wexford noticed a short, muscular man wearing a scarf and walking a dog. The man gave Wexford an unnerving stare. Without any solid evidence, Wexford began to suspect that this man -- Eric Targo -- was the killer.

Over the years there are more unsolved, apparently motiveless murders in the town of Kingsmarkham.

Now, half a lifetime later, Wexford spots Targo back in Kingsmarkham after a long absence. Wexford tells his longtime partner, Mike Burden, about his suspicions, but Burden dismisses them as fantasy. Meanwhile, Burden's wife, Jenny, has suspicions of her own. She believes that the Rahmans, a highly respectable immigrant family from Pakistan, may be forcing their daughter, Tamima, into an arranged marriage -- or worse.
Reviews from Goodreads.com

When you read this book you realize that Ms. Rendell is coming to the end of her wonderful Inspector Wexford series. I for one am sad to see this, but look forward to reading her next book "The Vault" which is recently out. In this book the enigmatic Wexford is being haunted by a ghost from his past. A ghost that he first met when he was just a young copper and newly on the force. A ghost who Wexford is convinced is a serial killer, but one that was never brought to justice. And then lo and behold the ghost comes back into Wexford's life after many years absence and Wexford and Burden are dealing with a present-day murder. Again Wexford has no evidence or proof other than his own assurance that this man is a serial killer and is still in the business, so to speak. I enjoyed the book. The first part of the book was especially strong, but the ending is a bit disappointing even though we know that things don't always work out the way they should in real life. I love Wexford and have enjoyed reading him over the past many years. He's a copper's copper and one who has good instincts and an intelligence that have all helped him be very successful in his long and illustrious career. Fortunately for me, I have still got quite a few non-series books written by the remarkable Ms. Rendell, and I'm going to enjoy getting through this list. She is a remarkable writer. 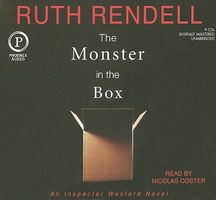