The Mist of God — Peter Longley 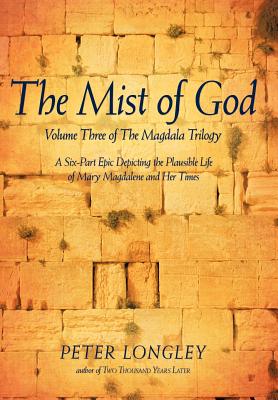 
With vivid prose and compelling characters, The Mist of God offers a captivating glimpse into Biblical times. The destinies of Linus Flavian, Maria of Magdala, and their son, Marcus, play out in this dramatic first-century story that spans the extremities of the known world of that time, from Britannia to India.
The Roman Empire is rising to its height while a fledging religious sect of Judaism reconciles itself with the mystery of its crucified leader, Joshua of Nazareth. Growing from a clash between nationalistic Judaism and a messianic universalism, followers from Saul of Tarsus to Simon Cephas take the fledgling faith out to the Gentile world on the trading routes of the House of Arimathea.
Their witness, however, differs from the very personal understanding of divinity that Maria believes she learned from her lover, the crucified Lord. Nevertheless, she passes this legacy on to her son, Ben Joshua, the child Joshua never knew. Ben Joshus finds this message enchanced when he travels to India as a partner in the House of Arimathea-but his survival is anything but certain.
The third in the dramatic series The Magdala Trilogy, The Mist of God provides a fascinating commentary on the origins of Christianity that is both challenging yet plausible, incorporating traditional beliefs, fictitious thoughts, and new controversial interpretations.