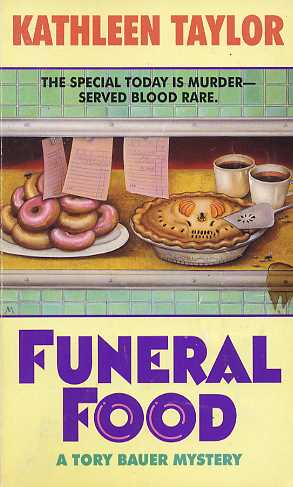 MURDER CAN KILL THE APPETITE
There aren't many amusements in little Delphi, South Dakota--and that suits Tory Bauer just fine. Widowed, over forty, and somewhat exceeding the surgeon general's weight guidelines, she's content to sling hash at the locals in the Delphi Cafe and craves no additional excitement. Her oversexed fellow waitress and trailer-mate Delphine, however, is always hungry for a new thrill. So when young, good-looking Mormon missionary Charles Winston brings his soul saving fervor to the Cafe's table, Del's all over him like ketchup on fries, totally unconcerned about how her boyfriend--the dangerously short-tempered county deputy, Big Dick Albrecht--will react.

And it's Tory who has to clean up the sloppy mess left behind--because it's she who discovers Winston's corpse stuffed in a mop closet several days later. Tory's large appetite for answers and natural talent for deduction are dumping her into a crockpot of lethal, long-simmering small town secrets. And if she's not careful, she'll wind up in the missionary's position: flat-out, stone-cold dead.
Reviews from Goodreads.com