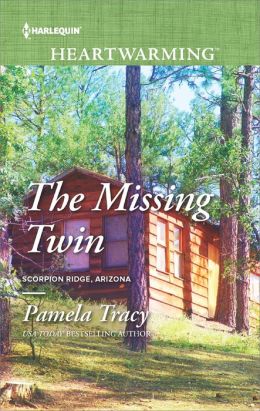 The secret between them

Angela Taylor knew her sister was in trouble. For anyone but a twin, her instincts would seem crazy, and her actions crazier. Picking up and moving herself and her daughter, Celia, to Scorpion Ridge and asking questions put them all at risk. Even more risky was trusting Jake Farraday, the handsome ex-cop turned forest ranger. Years in witness protection had taught Angela to trust no one. Yet with Abigail missing, Jake was her only hope, and she found herself wanting to share more of her past with him. And more of her future. But did Jake have his own motives for helping Angela?
Reviews from Goodreads.com

The Missing Twin by Pamela Tracy
Scorpion Ridge, Arizona Series Book Five
Angela Taylor, or at least that is the name she is going by while living in Scorpion Ridge, has broken the witness protection protocol because of her twin sense. She knows something is wrong with her twin sister and is determined to find her...at almost all costs.

Jake Farraday left his job as a cop a decade ago after feeling responsible for a civilian getting hurt because he didn't break his cover. Now, as a forest ranger, he feels more capable of protecting land instead of people. Until Angela comes to town. He feels he may have a second chance at redemption.

Such a good series. Living in Arizona, I always enjoy Pamela's books because I can somewhat relate to the areas that they take place...even though fictional places. She also brings the previous characters back into the books, which helps connect the stories and people.
http://justjudysjumbles.blogspot.com/2011/09/pamela-tracy-booklist.html