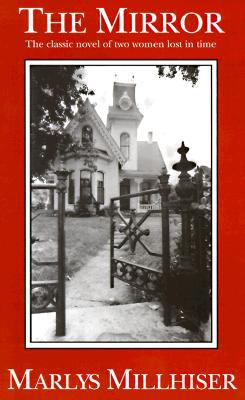 The Mirror. It is a full-length looking glass in a grotesque bronze frame of talonlike fingers, brought from China to San Francisco in the late 1800s. And it is evil... -- When Shay gazes into the mirror's smoky depths on the eve of her wedding, she is mysteriously drawn back in time, awakening in the same house, but in another body, that of h... more »er grandmother, Brandy. And the independent, tempestuous Brandy is transported as well--from seventy-five years in the past into the present body deserted by her granddaughter, Shay.

Plunged into a primitive, 19th-century mining camp, condemned to a living hell of knowing the future and being forced to endure it unalterably, Shay finds herself marrying her own grandfather, giving birth to her own mother, and astonishing everyone by predicting the future--a future which is all too cruelly her own family past.
Reviews from Goodreads.com

I first read this book many, many years ago, probably sometime in the 80's. It's one of those stories that I loved and it has always stayed with me, with a couple of scenes from the book still vivid in my mind. Only a couple though, as I realized upon rereading that the vast majority of the book did not jar any memories. Which was nice though, as it was like reading it for the for the first time. Anyway, when I saw it on the sale shelf at the library back in April 2006, I snatched it up. So now I've finally gotten around to actually reading it.

I love time travel stories. Not necessarily the science fiction time travel, though I'll read those. But my preference is the accidental, how in the heck did this happen and where in the heck am I time travel. Like Outlander, by Diana Gabaldon, my all time favorite book ever, which I've read twice, and have recently been itching to read again even though I have a million books I haven't yet read once. And Seducing Mr. Darcy, by Gwyn Cready, a close runner up, which I've read once but kept because I know I'll read it again one day.

Shay Garrett lives in 1978, and is marrying Marek Weir tomorrow. Her elderly 90-something Grandma Bran has been released from a nursing home to attend the wedding. Shay and Grandma Bran both look into the ugly mirror and their eyes meet, and then Shay feels like she's in an earthquake, and when she wakes up, she is in another time, another body. She is now in Brandy's body, on the eve of her own wedding.

Shay finds herself married off and living in destitute conditions with her new husband, who seemingly has no interest in or affection her – indeed, he married her in exchange for her father's mine. Cuz marriages often happened that way in those days, (shudder). Brandy is known as being a little crazy, and had already turned down two marriage proposals, and her father hopes that with this marriage, and maybe some kids coming along, the talk and gossip about her will settle down and her family will no longer need to be ashamed of her. Little did he know.

Over the years, Shay attempts to gt the marriage to work it's magic again and send her back to her own body in her own time, while learning to live in the past. She becomes known as a seer of the future. She ends up marrying again, this time to her own grandfather, and eventually she gives birth to her uncles and her mother.

At first, when she met her grandfather, I was a little put off by where the story would go, as was Shay. I mean, it's kind of creepy to think about having sex with your grandfather, even if he is young and gorgeous.

The book is divided into three parts, Shay's story, Rachael's story, and Brandy's story. Shay's is the longest, and the most interesting. Rachael is Shay's daughter, and her section is short, starting when she's a young girl and going up through her marriage,which her mother of course predicted. Rachael loves her mother, but resents Brandy (really Shay) always knowing what she will do before she does.

Then we get Brandy's story, starting from her own new awakening in Shay's body, and trying to adjust to this new loud and crowded world, where women go around barely dressed and couples kiss and grope each other in public. Where the wife sits at the table while the husband cooks. Where Shay's parents seem to actually care about their daughter and want her to happy, rather than sending her off to marry a stranger.

Brandy has a lot more trouble adjusting than Shay did. For Brandy the struggle to adjust was more internal. I would have liked to see her out in the world, interacting with people more, but I get that the whole experience was probably a much larger culture shock for her than for Shay. Going into the future, you have no idea what to expect. Going into he past, you've studied history in school, you've heard stories from your parents, you might not have seen something in real life but you still know what it is because in your time people know about the past. Brandy was a much more passive person than Shay, but then she was also very much a product of her time.

I didn't really like the direction Brandy's story took, but I was satisfied with the way it ended. But even if I hadn't been, I still would have loved this book just for Shay's story. The writing is wonderful, the detail, particularly in Shay's story, is fantastic. The book is awesome.