The Ming and I — Tamar Myers 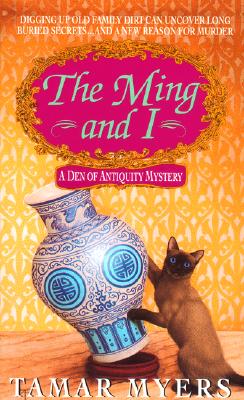 North Carolina native Abigail Timberlake, owner of the Den of Antiquity, is quick to dismiss the seller of a hideous old vase--until the poor lady comes hurtling back through the shop window minutes later, the victim of a fatal hit-and-run.

Tall, dark, and handsome Homicide Investigator Greg Washburn--who just happens to be Abby's boyfriend--is frustrated by conflicting accounts from eyewitnesses. And he's just short of furious with his ever-lovin', when he learns it was a valuable Ming vase, and Abby let it vanish from the crime scene. Abby decides she had better find out for herself what happened to the treasure--and to the lady who was dying to get rid of it.

It turns out the victim had a lineage that would make a Daughter of the Confederacy green with envy, and her connection with the historic old Roselawn Plantation makes that a good place to start sleuthing. Thanks to her own mama's impeccable southern credentials, Abby is granted an appointment with the board members--but no one gives her permission to snoop. And digging into the long-festering secrets of a proud family of the Old South turns out to be a breach of good manners that could land Abby six feet under in the family plot.
Reviews from Goodreads.com