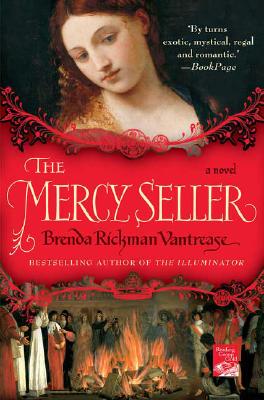 IN THE FIFTEENTH CENTURY, with religious intolerance spreading like wildfire across Europe, Englishwoman Anna Bookman and her grandfather, Finn, earn a living in Prague by illuminating precious books -- including forbidden translations of the Bible. As their secret trade grows ever more hazardous, Finn urges Anna to seek sanctuary in England. Her passage abroad, however, will be anything but easy.

Meanwhile, a priest in London, Brother Gabriel, dutifully obeys church doctrine by granting pardons... for a small fee. But when he is sent to France in disguise to find the source of the banned manuscripts finding their way to England, he meets Anna, who has set up a temporary stall as a bookseller. She has no way of knowing that the rich merchant frequenting her stall is actually a priest --just as he does not know that he has met the woman for whom he will renounce his church.

It is only in England, which is far from the safe harbor once imagined, that their dangerous secrets will be revealed.
Reviews from Goodreads.com