The Memory of Fire — George Foy 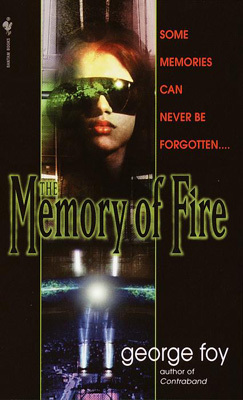 In a dark and not-so-distant future, whole populations are addicted to virtual sensation--and vast bureaucracies are using deadly force to rid themselves of troublemakers. Within this world, small, self-contained communities--called nodes, or cruces--live in an anarchistic freedom that threatens organized society. This is the world of accordionist and composer Soledad MacRae.

When the cruce of Bamaca on the South American coast is destroyed, Soledad flees to northern California in search of a Yanqui node to give her refuge. But terrifyingly realistic dreams of her old city intrude on her peace. It soon becomes clear that Soledad's visions of her doomed home have somehow turned into a black prediction of how the bureaucracies will wipe out the American node. Now, to save her new refuge, Soledad must uncover the deadly secret that lies at the heart of her old life, particularly her passionate love affair with rebel poet Jorge Echeverria, whose incendiary poems she once set to music. For music is the final key, not only to the bureaucracies' deadly plans, but to the ultimate mystery of her own survival.
Reviews from Goodreads.com