The Marvelous Inventions of Alvin Fernald — Clifford B. Hicks 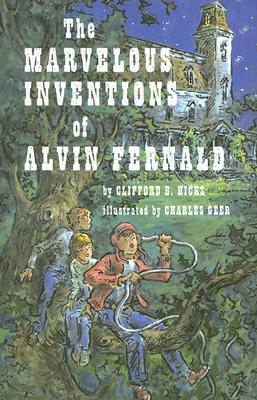 Share:
Since 1960, both boys and girls have enjoyed reading about Alvin Fernald and his Magnificent Brain. Whenever it clicks into action and a glassy stare comes into his eyes, it's time to watch out Because Alvin is thinking up another marvelous invention.
Maybe it's the Foolproof Burglar Alarm for his bedroom door, or a Sure Shot Paper Slinger for delivering newspapers from his bike. Or a Portable Fire Escape, very handy when it comes time to crawl out the window for a secret meeting with his best pal, Shoie. No doubt about it, as his sister the Pest says, "Alvin is a genius "
The hint of a mystery surrounding the old Huntley place is all Alvin needs to launch a new series of inventions which bring extraordinary results. His remarkable inventing bench becomes the scene of frenzied activity. With Shoie and the Pest, who always tags along, there is never a dull moment as Alvin unfolds the most brilliant plan of his career.