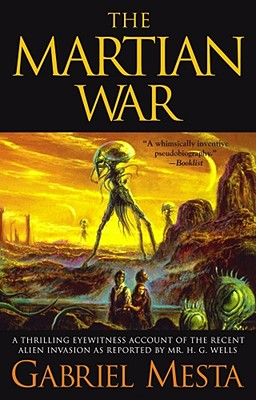 Classic science fiction author H. G. Wells's most memorable and compelling novel was arguably The War of the Worlds, made even more famous by the notorious Mercury Theater production starring Orson Wells that resulted in the "Night That Panicked America."

But what if the Martian invasion was not entirely the product of H. G. Wells's vivid imagination? What if Wells witnessed something that spurred him to write The War of the Worlds not as a form of entertainment -- but as a warning to the complacent people of Earth?

International bestselling author Kevin J. Anderson, writing here as Gabriel Mesta, explores that tantalizing theory in this unique, thrilling novel that expertly evokes the Victorian era. The Martian War takes the reader on an exhilarating journey with Wells and his companions, from drafty London flats to the steamy Sahara, to the surface of the moon, and beyond. Discover the truth about Martian invasion not only from Wells himself, but also from the enigmatic Dr. Moreau, who documents the very first alien autopsy! Written by one of our most popular science fiction authors, and filled with both historical detail and marvelous flights of fancy, The Martian War is pure delight from start to finish.
Reviews from Goodreads.com