The Mapping of Love and Death — Jacqueline Winspear 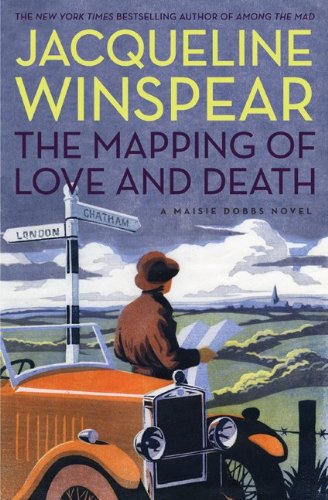 August 1914. As Michael Clifton is mapping land he has just purchased in California's beautiful Santa Ynez Valley, war is declared in Europe -- and duty-bound to his father's native country, the young cartographer soon sets sail for England to serve in the British army. Three years later, he is listed as missing in action.

April 1932. After Michael's remains are unearthed in France, his parents retain London psychologist and investigator Maisie Dobbs, hoping she can find the unnamed nurse whose love letters were among their late son's belongings. It is a quest that leads Maisie back to her own bittersweet wartime love -- and to the stunning discovery that Michael Clifton was murdered in his dugout. Suddenly an exposed web of intrigue and violence threatens to ensnare the dead soldier's family and even Maisie herself as she attempts to cope with the impending loss of her mentor and the unsettling awareness that she is once again falling in love.
Reviews from Goodreads.com

I have to say I wasn't taken with the title of this book at first. It seemed rather cumbersome to me, but as it was the next in this awesome series, I couldn't wait to get back to a series that I've left in hiatus for far too long. . I love the Maisie Dobbs series, but this book blew me away. By far the best in this series so far. Maisie is a woman ahead of her time. She is a strong woman with very definite career goals. She's also smart as blazes and her psychology background allows her to read people very skilfully. With this book Maisie is a bit distracted as her long term mentor, and dearest friend is in failing health. Maisie cannot imagine her world without Maurice Blanche in it. She is also distracted by the arrival of James Compton who has been away in Canada for an extensive period of time. Now he appears to be back in London, and Maisie senses that her life is about to change with this new romantic interest. Maisie with her index cards and her case maps and her trusty assistant Billy are trying to find out what happened to a young American soldier who was in the Cartographers Division in France during the recent war (WWI). His body has just been uncovered 16 years later, and there is evidence that it wasn't the shell that got his bunker that killed him and his mates, but something in the nature of a blunt object. Maisie and Billy uncover a whole bunch of past history and secrets that have a strong bearing on this case. This is a great book and I'm looking forward to Book 8 after reading this one. The story ends with Maisie facing a whole different future than what she has at the beginning of the book. This will make for some great storytelling in futue books. Another series that I want to double down on.

The Mapping of Love and Death is the seventh book in the Maisie Dobbs series by British-born American author, Jacqueline Winspear. Psychologist and investigator, Maisie Dobbs is engaged by a Boston couple, Edward and Martha Clifton, whose youngest son, Michael, died in the trenches in France in 1917. Not until fifteen years later were his remains found, and with them, letters from an English Nurse.

Michael was a cartographer who had just spent part of his inheritance on land in California that he felt sure bore oil. When the autopsy report shows that he was murdered, Maisie is asked to track down his unnamed nurse and, if she can, to find his murderer. To distract her from her task, James Compton returns from Canada for good, her mentor, Maurice Blanche becomes increasingly frail, and Billy Beal is understandably apprehensive about Doreen’s return from hospital.

This instalment explores the vital role of cartographers in war, as well as the important contribution of the many Nursing Units, and the purpose of cinematographers on the front lines. Maisie has to deal with DI Caldwell now that Stratton has gone to Special Branch; she is mugged, goes to car races, visits the School of Military Engineers and more than one hospital. The value of post-traumatic counselling is highlighted, and Winspear drags several red herrings through her plot to keep the reader guessing on more than one front. The final chapters see great changes wrought in Maisie’s personal life and presage possible major alterations in her career. Once again, an excellent read that will have readers seeking out the next book in the series, A Lesson In Secrets. 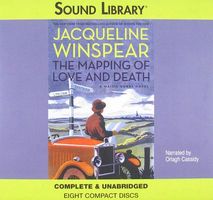