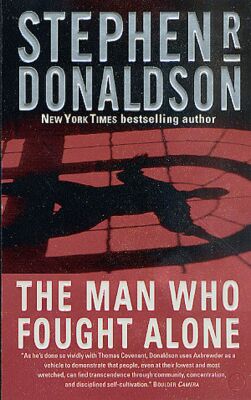 Share:
In a sprawling new novel, Stephen R. Donaldson tells a tale of a hero's dark night of the soul.
Mick Axbrewder has enough problems to kill any ten lesser men. He's a recovering alcoholic. He's also healing-painfully and slowly-from a gunshot wound that nearly killed him. His old partner, Ginny, seems to want as little to do with him as possible.

Years ago, he and Ginny worked side by side. That was before he accidentally shot and killed a cop. While drunk. A cop who happened to be his brother.

Now Axbrewder-"Brew" to his friends-is trying to make his way back to self-respect. It isn't easy. It doesn't help that Ginny has moved them to the sprawling, heartless Sunbelt city of Carner, where he can't get the "feel" of the streets. At least he has work, handling security in the booming martial-arts industry centered in Carner. A world of modern commercial competition and ancient resentments. A world with hidden stakes, over which someone is evidently willing to kill.

But Brew's real job isn't the one for which he's been hired. His real job is regaining his own self-respect.