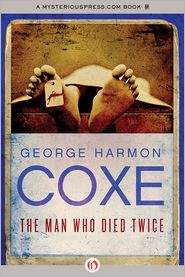 To steal a Caribbean inheritance, an American impersonates a prodigal son

Though his name is Duncan Ward, he lands in Barbados with a passport reading “Jim MacQuade.” The MacQuade family meets him at the airport with open arms, welcoming home the son who left the Caribbean over a decade earlier. Duncan knows Jim from college, and over the years has accumulated enough details of the MacQuade plantation to carry off the fraud. Old John MacQuade is near death, and Duncan hopes to win Jim's piece of the disintegrating family fortune.

Expecting a broken-down, heavily mortgaged farm, he finds a thriving business, one that is valuable enough for his supposed family to be on their guard. Someone has already tried to poison the old man in an attempt to kill him before he changes the will in Jim's favor. If Duncan is found out, the family may not be amused by his lie.
Reviews from Goodreads.com