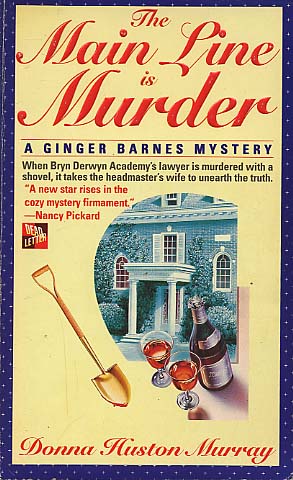 Since she moved to Bryn Derwyn, Ginger Barnes has learned to expect the unexpected.

But nothing could have prepared her for murder.

Meet Ginger Struve Barnes--wife, mother, Phillies fan. Gin's known for her bright copper-colored hair (don't call her Red) and her do-it-yourself skills. The latter have come in handy since her husband Rip was made the new headmaster of Bryn Derwyn Academy, a muckety-muck private school on Philadelphia's Main Line. For no one bothered to inform the Barneses of the school's sad state of repair--or that the headmaster's family was expected to live in a former storage unit.

After six months on the "Mop Squad," Gin's looking forward to holiday shopping with the kids. Instead, she's sucked into a scandal that threatens to ruin Bryn Derwyn. A fresh corpse has been found on campus, and panicked parents are pulling their kids out of school. Gin figures if she can clean up the school, she can clear its good name. But doing so will pit her against a powerful and ruthless enemy--and put the Barnes family right in the line of fire.
Reviews from Goodreads.com