The Maiden and the Unicorn — Isolde Martyn 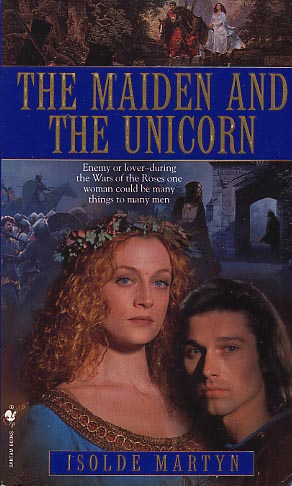 The year is 1470 and the legendary Wars of the Roses threatens to tear England apart. In the middle of the conflict is a most unlikely heroine. For Margery, the beautiful and spirited ward of Warwick the Kingmaker, freedom is the only prize worth having. But it is a prize that could cost her her life.

Sent to France on a mission for King Edward IV, she finds herself the target of a man who may be one of the king's most dangerous enemies. Sir Richard Huddleston is bold, enigmatic, and devastatingly handsome. He is used to getting what he wants, and he wants Margery to be his wife. But what else does he want? Margery suspects that Richard has abandoned the king and the house of York and is conspiring with the rebel queen and the traitorous house of Lancaster.

Caught between her role as a spy and a fierce passion that neither she nor Richard can deny, Margery finds her heart exposed to the ultimate danger: falling in love. Yet she cannot admit her real mission to Richard. For if she stays true to her noble cause, she'll save many men...and lose the one that matters most.
Reviews from Goodreads.com