The Maid and the Queen — Nancy Goldstone 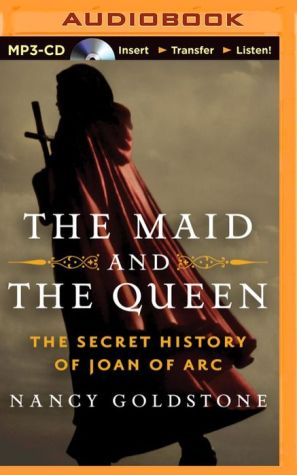 
Politically astute, ambitious, and beautiful, Yolande of Aragon, queen of Sicily, was one of the most powerful women of the Middle Ages. Caught in the complex dynastic battle of the Hundred Years War, Yolande championed the dauphin's cause against the forces of England and Burgundy, drawing on her savvy, her statecraft, and her intimate network of spies. Even when the dauphin's own mother betrayed him, Yolande fought to save her son-in-law and his claim to the throne. But the enemy seemed invincible. Just as French hopes dimmed, an astonishingly courageous young woman named Joan of Arc arrived from the farthest recesses of the kingdom, claiming that she carried a divine message ― a message that would change the course of history and ultimately lead to the coronation of Charles VII and the triumph of France. Now, on the six hundredth anniversary of the birth of Joan of Arc, this beautifully written book explores the relationship between these two remarkable women. With irresistibly rich historic detail and stunning accounts of political intrigue, The Maid and the Queen deepens our understanding of this dramatic period in history. How did an illiterate peasant girl gain access to the future king of France, earn his trust, and eventually lead his forces into battle? Was it only the hand of God that moved Joan of Arc ― or was it also Yolande of Aragon?