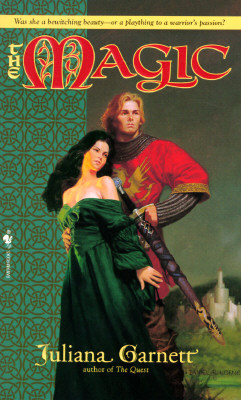 SHE CAST A SPELL OF PASSION IN A DANGEROUS DUEL OF HEARTS. . .
At first Rhys ap Griffyn thought the lady with the raven-dark hair was on an enchanted creature, for the locals warned him not to ride on Beltane Eve. But Rhys had hurried back from King Richard's crusade to claim his heritage ... only to meet his fate in this mysterious woman who set his blood on fire.

Although she was possessed of the "gift," Sasha was unable to read the tall, blond knight. But his shield was adorned with the griffyn, the sign of the hero she dreamed would help restore her lost kingdom.

She named the stakes and he agreed. His reward: a night in her arms. One night to conquer what could not be taken by magic or might, but only given freely ... her heart.
Reviews from Goodreads.com