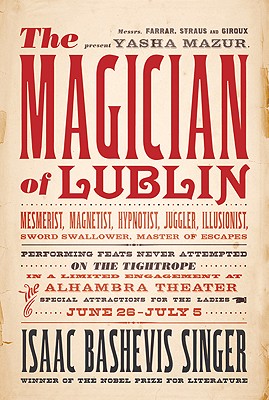 The fiftieth anniversary of a lost classic a deceptively sophisticated tale of sexual compulsion and one man's flight from love
Yasha Mazur is a Houdini-like performer whose skill has made him famous throughout eastern Poland. Half Jewish, half Gentile, a freethinker who slips easily between worlds, Yasha has an observant Jewish wife, a Gentile assistant who travels with him, and a mistress in every town. For Yasha is an escape artist not only onstage but in life, a man who lives under the spell of his own hypnotic effect on women. Now, though, his exploits are catching up with him, and he is tempted to make one final escape from his wife and his homeland and the last tendrils of his father's religion.
Set in Warsaw and the shtetls of the 1870s but first published in 1960 Isaac Bashevis Singer's second novel hides a haunting psychological portrait inside a beguiling parable. At its heart, this is a book about the burden of sexual freedom. As such, it belongs on a small shelf with such mid-century classics as Rabbit, Run; The Adventures of Augie March; and The Moviegoer. As Milton Hindus wrote in The New York Times Book Review, "The pathos of the ending may move the reader to tears, but they are not sentimental tears . . . Singer] is a writer of far greater than ordinary powers.""
Reviews from Goodreads.com