The Magic in Changing Your Stars — Leah Henderson 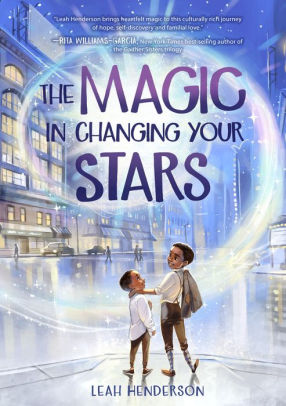 
Can you change your fate—and the fate of those you love—if you return to the past? Journey to 1939 Harlem in this time-travel adventure with an inspiring message about believing in yourself.

Eleven-year-old Ailey Benjamin Lane can dance—so he’s certain that he'll land the role of the Scarecrow in his school’s production of The Wiz. Unfortunately, a talented classmate and a serious attack of nerves derail his audition: he just stands there, frozen. Deflated and defeated, Ailey confides in his Grampa that he’s ready to quit. But Grampa believes in Ailey, and, to encourage him, shares a childhood story. As a boy, Grampa dreamed of becoming a tap dancer; he was so good that the Hollywood star and unofficial Mayor of Harlem, Bill "Bojangles" Robinson, even gave him a special pair of tap shoes. Curious, Ailey tries on the shoes  . . . and instantly finds himself transported to 1930s Harlem. There he meets a young street tapper and realizes that it’s his own grandfather! Can Ailey help the 12-year-old version of Grampa face his fears? And, if Ailey changes the past, will he still be able to get home again? Featuring an all-African-American cast of characters, and infused with references to black culture and history, this fantasy is sure to inspire readers.