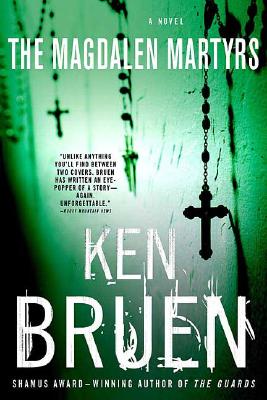 Jack Taylor is walking the delicate edge of a sobriety he doesn't trust when his phone rings. He's in debt to a Galway tough named Bill Cassell, what the locals call a "hard man." Bill did Jack a big favor a while back; the trouble is, he never lets a favor go unreturned.

Jack is amazed when Cassell simply asks him to track down a woman, now either dead or very old, who long ago helped his mother escape from the notorious Magdalen laundry, where young wayward girls were imprisoned and abused. Jack doesn't like the odds of finding the woman, but counts himself lucky that the task is at least on the right side of the law.

Until he spends a few days spinning his wheels and is dragged in front of Cassell for a quick reminder of his priorites. Bill's goons do a little spinning of their own, playing a game of Russian roulette a little too close to the back of Jack's head. It's only blind luck and the mercy of a god he no longer trusts that land Jack back on the street rather than face down in a cellar with a bullet in his skull. He's got one chance to stay alive: find this woman.

Unfortunately, he can't escape his own curiosity, and an unnerving hunch quickly turns into a solid fact: just who Jack's looking for, and why, aren't nearly what they seem.
Reviews from Goodreads.com

This is the third book in the Jack Taylor series, and we find that not much has changed with Jack. He's still living in the same third rate hotel and being looked after by the octogenarian woman who owns the establishment. He is still drinking, smoking and taking all kinds of drugs. And he keeps finding himself in personal danger as he pursues his lines of enquiries. Jack is fully aware of his shortcomings, and he has oodles of coping mechanisms to help him deal with his self-loathing. For example he is a voracious reader, and he retreats to his books whenever he needs to find time to think. Only the best for our Jack - books from his favourite used bookstore, clothes from the charity shops and a full pharmacopia of drugs in the floorboards of his room. I love these books. Bruen's writing is spare and to the point. He says more in such few words than most novelists can manage in large tomes. We see the dark underside of Galway, Ireland through Jack's jaded eyes (and usually through an alcoholic fog). In this book we pursue some of the history and the horror stories from the now-closed Magdalen Laundry in Galway. Many young girls were left here and forgotten when they found themselves unmarried and pregnant, or on the wrong side of the law. The establishment opened in the 18th century and were finally closed sometime in the mid-20th century. The stories that come from these Catholic institutions are horrendous and heartbreaking and Jack finds himself drawn into them while he's trying to find someone who used to work in the laundry at one time. This is a quick read, but a very good one. Kept me turning pages for sure.