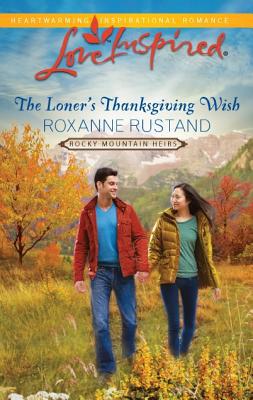 Adopted as a baby, Mei Clayton never felt like she belonged in her family. She left tiny Clayton, Colorado, the moment she could. Now, to fulfill the terms of a will, she must move home for a year. But when she reunites with handsome Jack McCord -- the mountain-rescue expert she once secretly loved -- she has to keep her distance. Their relatives have feuded for years. She'll never fit in with the Claytons if she gives in to her feelings for Jack. Unless faith and love can help open hearts in time for Thanksgiving.
Reviews from Goodreads.com

The Loner's Thanksgiving Wish by Roxanne Rustand
The Rocky Mountain Heirs Series Book 5
The fifth grandchild has come back to Clayton in lieu of Grandpa George's will's requirements. Mei Clayton has never felt as if she belonged in the Clayton clan. Vern and Lisette adopted her from China and a few years later Lucas was born. She was a shy girl who may have been misunderstood as being snooty. In high school a rumor started about her feelings for Jack McCord, the step-son of Charlie Clayton. She did have a crush on Jack but it was all very humiliating for her. Mei plans on staying for her year and then return to her teaching job in San Francisco. Her first day back an accident brings her face to face with Jack.

Jack McCord is a Wildlife Biologist. He has returned to Clayton for one reason, Cade, his younger step-brother. Jack's life has not been easy. His mom is on her third marriage, his step-dad Charley was never a father to him or Cade, he can't convince his little brother not to marry so young, and now on top of everything else Mei has returned and he keeps running into her. Maybe he will have a second chance to get to know her even though they have to survive the Clayton feud to do so.

Vincent and his cronies continue to try and chase their cousins away so that Samuel's family will get George's inheritance. So far they have failed at each attempt to get even one cousin to leave town. Lucas has been out of touch so far and last they heard he was running from a drug gang in the Florida everglades and he may have a young child with him. And Darlene Perry is getting weaker from her disease but still refuses to tell anyone who Macy's father is. Great series, can't wait to read the last book.

Mia's story was pretty good, though I enjoyed a lot of the others better. Her mother really got on my nerves with her "Stay away from Jack, he's trash" talk. I was very, very, very happy to see her put in her place at the end of this story! I wish I could have seen it live - bet it was great!!! Jack was a sweetheart as well. I love what he did for the family, but I don't see it as believable - it was way too fast and way too easy. How could he do something in just a few days that professionals had been trying to do for months? Nope, can't believe that part.

I still have to give this book a five because the entire series is just great. I felt really sorry for the teenager who was forced into doing something just to try to get at Mia. The results of that were pretty good to.

Well, it's on to the last book where we'll see the victims finally get their just award, and the enemies get what they deserve as well, I hope. We'll also get answers to all our questions!