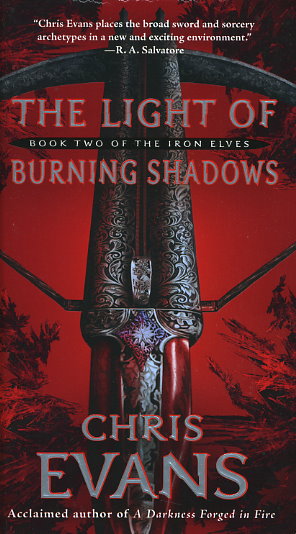 Share:
As the human-dominated Calahrian Empire struggles to maintain its hold on power in the face of armed rebellion from within, the Iron Elves' perilous quest to defeat the power-hungry elf witch, the Shadow Monarch, takes on greater urgency. The Iron Elves, shunned by their own people for bearing the mark of the Shadow Monarch, and desperately wanting to forever erase this shame, became legendary for their prowess on the battlefield as the Calahrian Imperial Army's elite shock troops. But when their commanding officer, Konowa Swift Dragon, murdered the Viceroy of Elf kyna, he was exiled, and these brave elves were banished to a remote desert outpost, doomed and leaderless, their honor in tatters. Recalled to duty to reform his regiment from the dregs of the Imperial Army, Konowa thwarted the plans of the Shadow Mon. arch at the Battle of Luuguth Jor -- ensuring that the fabled Red Star, a source of great natural energy, did not fall into Her hands.

Now Konowa must cross storm-tossed seas to seek out the lost elves and the prophesied return of another Star somewhere in a desert wasteland roiling with mysterious power, infernos of swirling magic, and legends brought back to life in new and terrible ways. And the fate of every living creature will come to depend on a small band of ragged and desperate soldiers, whose very loyalty to the Empire they have sworn to serve is no longer certain. When death is but a temporary condition, a terrifying question arises: who is the true ally -- and fearsome enemy -- in a growing conflict that threatens all