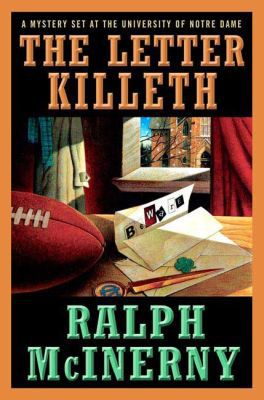 Share:
Once the college football season draws to a close for the Fighting Irish, there is little reason to ride out the winter in South Bend, Indiana. Those who can leave do, but P.I. Philip Knight stays on at Notre Dame when the university asks him to discreetly investigate a rash of threatening letters that have been sent to a number of administrators, including the new football coach, who resurrected the team in a single year.


While conspiracy theories are as prevalent as the cold, Philip and his brother Roger think the letters are probably a prank or possibly a student paper's attempt at yellow journalism but nothing more. Then a controversial professor's car is set on fire, a man is found dead on campus, and the Knight brothers find themselves hot on the trail of a killer in Ralph McInerny's tenth mystery set at Notre Dame.