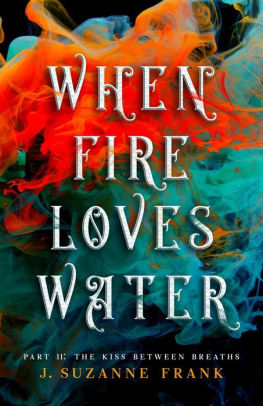 Share:
The Kiss Between BreathsIn a time of upheaval, all secrets are revealed ...Isla and Taz are both trying to save the world. They don't know they are secret allies ... yet.Isla Wilson is now both Sireni and Daeveni. She alone can descend to the Smokelands to save her mermaid sisters and stop their plan to punish humanity for destroying the sea. It's simple: cross a bridge with killer ghosts, ask the Phoenix to return a magic map, and oh, yeah, get her not-dead Daeven father to help.Taz Howell's private vow to defend the sea, despite being Phoenix, expands when he learns the Daeveni are pursuing the ultimate weapon among the Elementals: the Lost Wave. Along the way he meets a Daeven, different from the others. Beautiful, and somehow familiar?The Sea is divided by fury, the Atls are increasingly untrustworthy, and Abovelands is experiencing the worst hurricane season in history. Even sociopathic Robert Howell feels ... uncertain. What are the lies that hold the world together? What does Bandalkrati mean?And what will happen to Water and Fire when the truth surfaces?