The Jewel and the Sword — Marjorie Jones 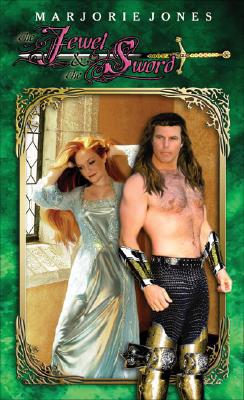 THE JEWEL
Following the ensuing battle with the Earl of Ravenstone's forces, Meghan Douglas tends to the wounds of her father's men, the Laird of Clan Douglas. Among the fallen, she finds a sorely wounded English knight. Though he is an enemy, Meghan takes pity on the handsome, burly stranger, and has him taken to a chamber. There, once he has been securely bound to her father's bed, she attempts to save his life, attending to the most intimate details of his care.

THE SWORD
When Devlin Barnett regains consciousness at last, it is only to find himself tied to a bed, being cared for by a beautiful young woman. Not just any young woman, however, but the daughter of his treacherous foster brother, the Laird of the keep, for whom he is now being held as ransom. To make matters worse, he finds his traitorous, vulnerable body responding to Meghan's tender ministrations in a most alarming, and conspicuous, manner.

Meghan cannot deny the powerful attraction she feels for the captive in her bed … the captive who so stubbornly refuses to give up his name. She knows only that he is one of the Earl of Ravenstone's knights.

Devlin finally manages to escape, both his imprisonment and the danger to his heart. He has not gone far, however, when he realizes he is being followed. His emotions are in peril once again, for the lovely Meghan insists he take her to Ravenstone's castle that she might plead for her father's release. She has no idea of her former prisoner's true identity. Or the forces of evil that will be unleashed to separate and destroy … The Jewel and the Sword
Reviews from Goodreads.com