The Invasion of the Boy Snatchers — Lisi Harrison 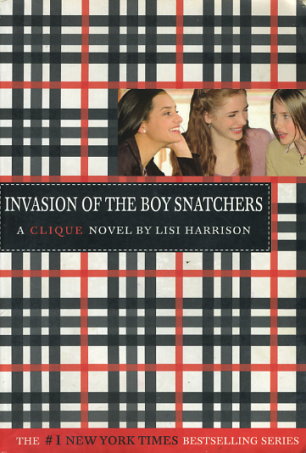 The Clique girls always get what they want...

Massie Block: Massie is less than thrilled when Claire's forced to move into Massie's bedroom, but Claire isn't the only person edging in on Music's territory--Alicia's hot Spanish cousin Nina arrives from Spain and starts flirting with all the Briarwood boys, including Massie's crush! Will Nina make every boy in Westchester fall in love with her? Or will Massie toss her out faster than last season's Sevens jeans...?

Claire Lyons: Claire got everything she wanted for Christmas, but presents don't matter to her--all she really wants is her first kiss from Cam!

Kristen Gregory: A tragic haircut disaster leaves Kristen looking like a boy Will she be condemned to a season of wearing hats when. as everyone knows, hats are so over?

Dylan Marvil: Dylan gained six pounds over break and feels totally fat. Hopefully she'll burn it all off trying to catch a boyfriend at the Valentine's Day Love Struck dance!

Alicia Rivera: Alicia's cousin Nina is the hottest thing to come from Europe since Versace and Freda. But when the Clique decides foreign imports are a total "Out", Alicia is forced to choose between her friends and her own overexposed flesh and blood....