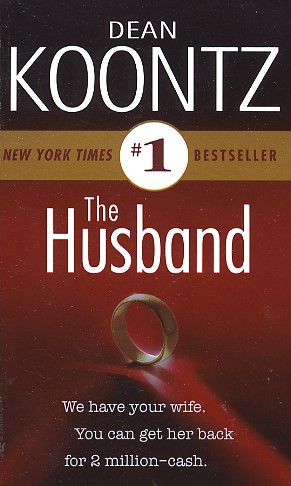 We have your wife. You can get her back for two million cash. On an ordinary afternoon, an ordinary man, a gardener of modest means, gets a phone call out of his worst nightmare. The caller is dead serious. He doesn't care that Mitch can't raise that kind of money. He's confident that Mitch will find a way. If he loves his wife enough...
Mitch does love her enough. He loves her more than life itself. He's got sixty hours to prove it. He has to find the two million by then. But he'll pay a lot more. He'll pay anything.

From its tense opening to its shattering climax, The Husband is a thriller that will hold you in its relentless grip for every twist, every shock, every revelation. This is a Dean Koontz novel, after all. And there's no other experience quite like it.
Reviews from Goodreads.com

"The Husband" is Mitch Rafferty, a few weeks from his 28th birthday, owns a two-man landscaping business, and is deeply in love with his wife of three years, Holly. One morning while on the job he gets a call... "We have your wife. You can get her back for two million cash."
The author goes in-depth with his characterizations and Mitch goes from easy-going nice guy to warrior as the 72 hours to save Holly's life begin the countdown. He writes with a lot of descriptive metaphors that I probably should have enjoyed more but I was anxious to get on with the action and didn't contemplate them for long.
Thriller: (A N/A)