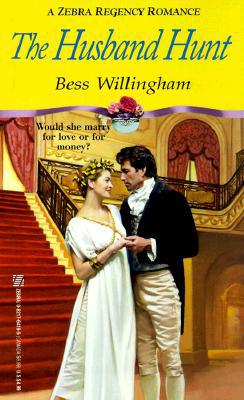 Would she marry for love or for money?

Her mission was to wed...
The disillusioned Lucinda Partridge knew there was only one reason for a woman to marry--money. About to lose all of hers, the desperate opera singer realized she must quickly find a husband. Why then couldn't she decide which one of her three wealthy admirers she should choose? Even more baffling, why was she constantly seeking the attentions of Sir Cosmo Fairchild--a decadent Corinthian who seemed strangely curious about her host of suitors...?

...His was to woo!
Sir Cosmo Fairchild had learned quite some time ago that all women were fortune hunters. The fetching Lucinda was hardly evidence to the contrary. What the would-be bride didn't know was that one of her admirers was actually a French spy--and Sir Cosmo was a secret agent in hot pursuit! Posing as a writer, he had little trouble convincing Lucinda to cooperate with his research on the men who wanted to marry her. It was resisting the temptation to join the ranks of Lucinda's suitors that was giving him the most difficult time of all!
Reviews from Goodreads.com