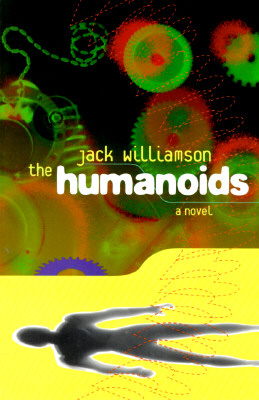 FIRST EQUINOX PRINTING. Jan. 1976 Avon trade paperback, Jack Williamson (Darker Than You Think). Clay Forester is a scientist working in a weapons laboratory on a distant planet, when a vast army of robotic "humanoids" land and, as they have done on countless other worlds, take control of every aspect of human society. The official line is to "guard men from harm", but in fact the humanoids deny any meaningful freedom to their human victims. Forester tries to fight back, with the help of a vagabond band of "psychophysical" adepts with amazing transphysical powers. Forester's long fight against the strictures and despotic "protections" offered by the humanoids makes a fascinating tale, which Damon Knight called "without a doubt, one of the most important science-fantasy books of its decade." - Amazon
Reviews from Goodreads.com