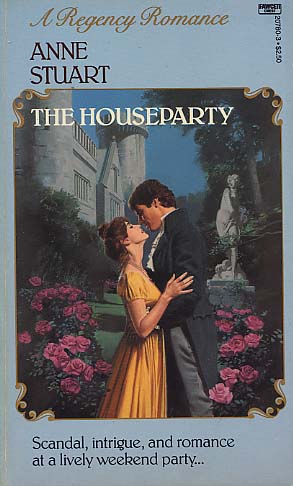 Scandal, intrigue, and romance at a lively weekend party...

HE WAS SO COLDLY HANDSOME, IT WAS POSITIVELY CRIMINAL.

Why, his icy blue eyes made Elizabeth's heart flutter at their very first meeting. No doubt about it, the rumors were right: this stony-faced soldier, Michael Fraser, was a traitor, a spy, a scurrilous French agent.

Yet her hapless cousin had invited him for the weekend! What mad mischief might this cur cook up in the course of a three-day houseparty full of distinguished guests?

Now Elizabeth is surely scandalized, for she hears that this stealthy spy has been querying the servants about her. Her own brother is off on a secret mission against Bonaparte - that must be the reason for Michael's monstrous attentions.

If only his gaze weren't so penetrating, his voice so hypnotic, his kiss so treasonously sweet. She never imagined a French agent could be this dangerous!
Reviews from Goodreads.com