The House of the Eagles — Elizabeth Ashton 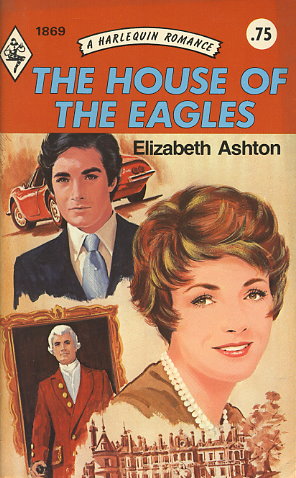 Had it been only a holiday romance?

Lois, a receptionist at a hotel in Italy, was afraid the answer was yes. Her whirlwind courtship with the visiting Canadian businessman, Val Daventry, ended abruptly when he had to leave for Germany.

True, he'd promised to come back to claim her in a month's time, but to Lois, it might have been an eternity.

Unjustly forced to return to England before the month was up, she supposed she would never see him again....

It was when Lois was working in sunny Italy that she met Val Daventry and to do her justice she had tried from the start to make herself believe that her lightning romance with him was only an ephemeral holiday affair, but she knew in her heart that it was much more than that; she would never love any other man. But unfortunately Val didn't seem to feel the same way; he went off on his travels and that was the last she heard of him.
Yet somehow Lois couldn't accept defeat. She managed to trace him and learnt that Val was not what she had thought him. He was not of her world, he was even engaged to another girl. Hadn't she just better give up the whole thing? Yet something made her go on trying ...
Reviews from Goodreads.com