The House Between the Worlds — Marion Zimmer Bradley 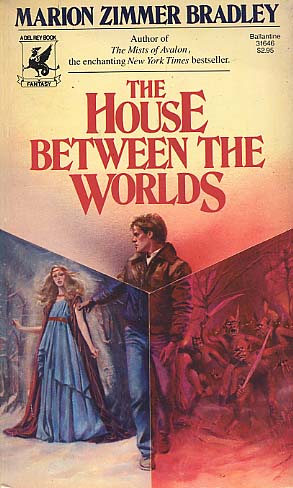 Fenton was only a 'tweenman, without body or shadow; his body lay back in the laboratory where Dr. Garnock was experimenting with a new drug. Yet Fenton was in the fairy world of the Alfar, helplessly watching the Faerie Queen of the Alfarattacked and captured by the hideous, goblinlike ironfolk. And he was fading, irresistibly being drawn back to his body.

He had to return to save the Faerie Queen--and to save his own world from the ironfolk. But not even Sally Lobeck would believe him. Garnock refused him more drug and confiscated the talisman that would have let him return in his body as a worldwalker, free to move through the Gateways between worlds.

His only hope lay in finding the mysterious House between the Worlds. But the House could only be found when and where it wanted. And apparently, it didn't want Fenton to find it!
Reviews from Goodreads.com