The Hoo-Hoo Are Coming — Mike Philbin 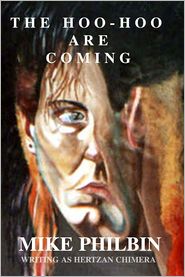 If the walls of reality started to crack, would you be brave enough to push through? What would a technologically advanced race like the SZMOHNFU want with a back-waters planet like Earth?

There's a serial killer on the loose--he's killing anyone whose name is an anagram of Judas Iscariot--and what seems like an arbitrary list of deaths soon amounts to a galactic conspiracy against mankind itself.

The dolphins know about it. And so does 'legendary crap elvis' heavy metal star James Doray!
Soon the whole of mankind will be let in on the sick joke. The Hoo-Hoo are Coming is a gut-wrenching exercise in true galactic contact with a mechanoisd intelligence that's way beyond any trite Hollywood dialogue or disclosure speech from a puppet president.

CONTAINS ADULT SCENES AND THEMES (HORROR, SEX, VIOLENCE, LANGUAGE) FROM THE OUTSET THAT MAY NOT BE SUITABLE FOR SOME READERS.
Reviews from Goodreads.com