The Hole We're In — Gabrielle Zevin 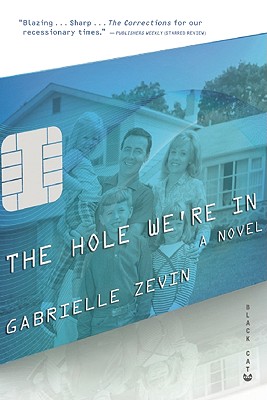 Share:
Gabrielle Zevin is an award-winning screenwriter and author whose novels for young adults, Elsewhere and Memoirs of a Teenage Amnesiac, have brought her great acclaim and a large and loyal following. With The Hole We're In--a bold, timeless, yet all too timely novel about a troubled American family trying to navigate an even more troubled America--Zevin delivers a work that places her firmly in the ranks of our shrewdest social observers and our top literary talents. Meet the Pomeroys: a church-going family of five living in a too-red house in a Texas college town. Roger, the patriarch, has impulsively decided to go back to school, only to find his future ambitions at odds with the temptations of the present. His wife, Georgia, is trying to keep things afloat on the home front, though she's been feeding the bill drawer with unopened envelopes for months and can never find the right moment to confront its scary, swelling contents. In an attempt to climb out of the holes they've dug, Roger and Georgia make a series of choices that will have catastrophic consequences for their three children--especially for Patsy, the youngest, who will spend most of her life fighting to overcome them. Though flawed and at times infuriating, Zevin's characters are so human and easy to relate to, it is difficult not to cheer them on as they fumble toward understanding each other, and in some cases, even themselves. In The Hole We're In, Gabrielle Zevin shines a spotlight on some of the most relevant issues of our day: over-reliance on credit, gender and class politics, and the war in Iraq. But it is her deft exploration of the fragile economy of family life--emotional, financial, and psychological--that makes this a book for the ages.