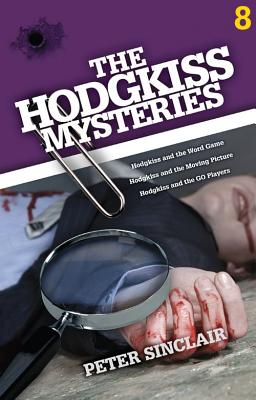 Observant, imaginative, creative, aggressive ... offensive; all terms that could be readily and fairly applied to Edgar Hodgkiss as he goes about the delicate business of assisting his son-in-law, Detective Sergeant Burke, solve crimes without humiliating him.

Hodgkiss and the Word Game: Members of the chronically factionalised and corrupt Kanundda Council are on a bonding weekend at a decayed bed and breakfast when one of them meets a particularly grisly end. But things are not at all as they first appear and Hodgkiss and his friend, Pat Strong, who happened by chance to be in the right place at the right time to make vital observations, help Donald to sort out a particularly unpleasant and devious crime.

Hodgkiss and the Moving Picture: A member of the planning minister's personal staff is found dead in suspicious circumstances in a fire escape in state parliament house. Again Hodgkiss and Pat happen to be on the spot but on a totally separate mission and their observations help Donald to bring the matter to a conclusion satisfactory to all except a corrupt developer and his cronies.

Hodgkiss and the GO Players: While enjoying eighteen holes on the Grattan Golf Course, Hodgkiss chats to a neighbouring resident while Donald hunts for the ball he has driven out of bounds. This conversation leads to the discovery of a plan to rort the local zoning so developers and their mates can reap handsome profits at the expense of the golf course and of ratepayers generally.

Hodgkiss at his inquisitive and belligerent best.
Reviews from Goodreads.com