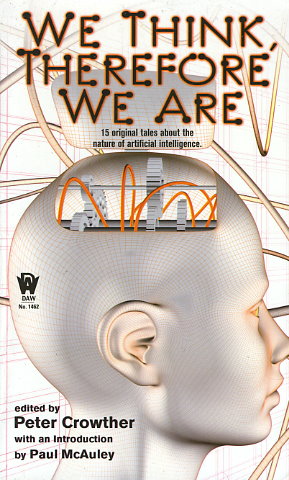 Scientists have spent decades attempting to construct true artificial ill intelligence. And while that goal has not yet been achieved, it is only a LIM matter of time before an actual independent, free-thinking Al is created, one which can go on to produce more of its kind.

Writers, not faced with the same restrictions as the scientists, have been telling stories about sentient robots, computers, etc., since the Golden Age of science fiction began.

Now fifteen masters of imagining have turned their talents to exploring the forms AIs may take in the not too distant future. Here are the III / descendants of Robby the Robot, the Terminator, and the Bicentennial .II Man, introduced in tales which answer such intriguing questions as: Can a historian and a U.N. bureaucrat find out what has gone wrong on an AI-run weather satellite that let a hurricane wreak havoc on Earth? Can a huge robo-truck bring itself to violate the three principles of the Highway Code in a time of emergency? Would a long-lost missionary starship offer a salvager proof that God exists? When "Adam robots" are placed claim III in the garden of knowledge will they obey their instructions or seek to the repository of truth? When the AIs have inherited the universe can they rediscover human beings?
Reviews from Goodreads.com