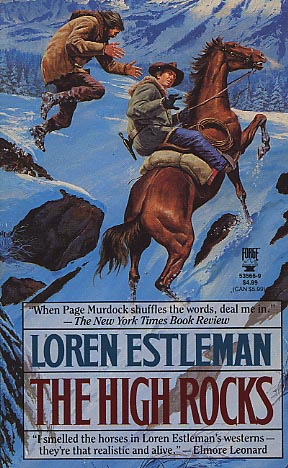 U.S. Deputy Page Murdock rides into the Bitteroot Mountains of Montana in the dead of winter to bring in Bear Anderson, known as "Mountain That Walks" to the local Indians. Standing seven feet tall, the legendary trapper is a tower of muscle who has sworn to avenge his family's massacre by scalping every Flathead he, can hunt down. The Flatheads have refused to talk treaty and are threatening to lead an uprising if the U.S. Government won't do something about him.

Murdock, having grown up with Anderson, figures he owes it to the big man to try to bring him in alive and give him a chance at a fair trial. But with a trio of ruthless bounty hunters and the whole Flathead nation closing in on Anderson's winter lair in the high rocks --all determined to bring the giant back dead -- Murdock may have all he can handle in getting himself back down alive.
Reviews from Goodreads.com