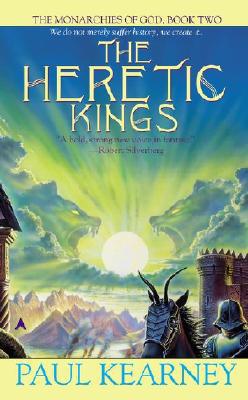 Share:
In times of chaos, when everything familiar is made strange and nothing remains secure, the future of all people is shaped by the actions of a few...

The resisters of terror
When the power-hungry and fanatical Pius won himself enough allegiance e magic-users and foreigners put to death, three of the five Ramusian King, denied him. But for their resistance, they must now fight to maintain their thrones--forcing one King to face a civil war so brutal that it threatens to destroy everything he fights to preserve.

The seeds of revolution
Toward the East, Corfe Cear-Inaf wins distinction in the ongoing battle against the Merduk attackers as he tries to protect the infirm High Pontiff Macrobius from political intrigue. And far to the West, Hawkwood and his band of misfits finally arrive in the fabled land across the sea, only to find themselves caught in an unexpected confrontation.

The keepers of the past
Meanwhile in Charibon, two humble monks discover an ancient manuscript that is destined to change the face of the world -- the biography of St. Ramusio himself. But now they must find a way to be heard...