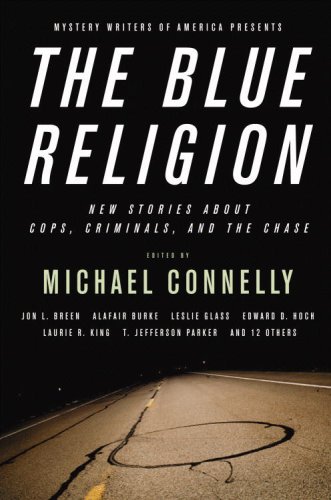 WHAT IS IT LIKE TO CORNER A MURDERER? TO UNMASK A HIDDEN KILLER?

In The Blue Religion, bestselling author Michael Connelly brings together nineteen original stories from some of today's greatest crime writers to reveal the thrills and dangers of being a cop.

Filled to the brim with gripping showdowns, these tales go beyond the exhilaration of the chase to show the true burden of the badge. They examine the lives of lawmen and -women who decorate their office desks not with photographs of family but with pictures of victims whose killers they still hunt.

In T. Jefferson Parker's "Skinhead Central': an ex-cop and his wife find unexpected menace in the idyllic setting they have chosen for their retirement. In Alafair Burke's "Winning": a female officer who is attacked in the line of duty must protect her husband from his worst impulses. In Michael Connelly's "Father's Day': Harry Bosch faces one of his most emotionally trying cases as he investigates the death of a young boy.

These hard-hitting stories -- including tales by Jon L. Breen, Laurie R. King, Peter Robinson, Paula L. Woods, and others -- make vividly real the fears and triumphs of those who put themselves in harm's way to face down the bad guys.
Reviews from Goodreads.com