The Heather and the Thistle — Kathleen Morgan 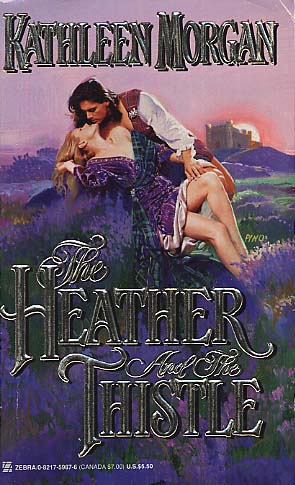 THEY WERE UNITED IN LOYALTY
Daughter of a Scottish lord, Heather Gordon was only obeying her father's wishes when she went off to the frigid highlands to teach brash Duncan MacKenzie noble ways. The handsome ruffian was Scotland's last hope to liberating Queen Mary from her island prison at Lochl even Castle, and although Heather knew she was helping her country's cause, she could not wait to return to her old life, where she was safe from temptation. For Duncan had ignited a savage desire she had never felt before...

...AND IN LOVE
Duncan MacKenzie had refused to become "civilized"...until he took one look at the blond beauty who was urgently begging him to rescue the Queen. Unable to resist such a sensuous young woman, he agreed to help her. Now, as fiery passion exploded between them, a treacherous lie threatened to destroy their dreams for Scotland's freedom and their indomitable love-a love as boundless and as lush as the heather hills they call home.
Reviews from Goodreads.com