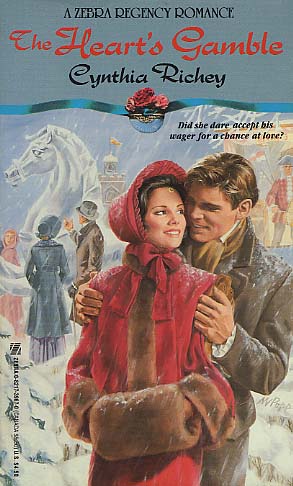 SHE WAS A PRIZE WAITING TO BE WON

Miss Ginny Makepeace was not the type of young lady who often entertained thoughts of romance-smart and sensible was the only way to be. Yet all thoughts of propriety were abandoned after she made the acquaintance of the Viscount Redmon--he was the most perfect man she had ever seen! With only a lingering gaze, the handsome young nobleman sent her bears pounding and took her breath away--never before had she felt this way! But thoughts of the dashing lord were quickly banished when Ginny found herself in a most worrisome dilemma: her father had gambled her virtue in a card game--and lost!

HE WAS A MAN WHO MEANT TO WIN

Robert St. George, the Viscount Redmon, always tried to be a gentleman. Never would be have countered the Earl of Wraxton's shocking demand that be marry Ginny with the offer of making her his mistress if he had known the demure beauty was the disreputable earl's only daughter. Once the truth was revealed, Robert was not against the idea of marriage to Ginny--there was no denying the girl drew his attention like a magnet and her soft lips met his with delectable ease--but the irrepressible Miss Makepeace would not allow him to do the honorable thing. Vexed by her stubborn insistence to maintain her independence, Robert brought the prim vixen back with him to London as his ward, determined to win her heart with his persuasive charms!
Reviews from Goodreads.com