The Hawk and the Dove — Virginia Henley 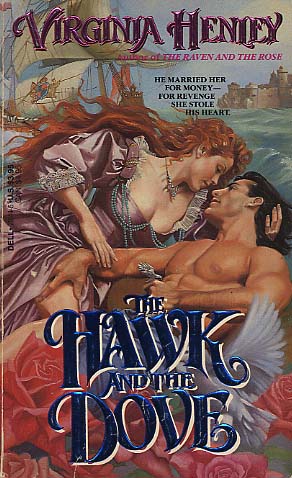 THE DOVE -- She'd been bought for a strip of land then abandoned: a bartered bride, married by proxy, determined to wreak revenge. As innocent Sara Bishop she'd paid dearly for freedom from her cruel, mocking family. As flame-haired jade-eyed Sabre Wilde, she would scandalize Queen Elizabeth's court as she set out to seduce her unknown husband, become his mistress -- and make him her slave.

THE HAWK -- The queen's favorite, called the Sea God, his white teeth flashed in his bronze face as his deep, virile voice boomed orders to his men. He branded Sabre with his searing kiss and his masterful touch, not even aware she w s already his wife. Captain Shane Hawkhurst knew how to command, how to subdue and ravage an enemy, but was he prepared to be caught in passion's merciless snare by a fiery beauty who ruled his heart and inflamed his senses?
Reviews from Goodreads.com